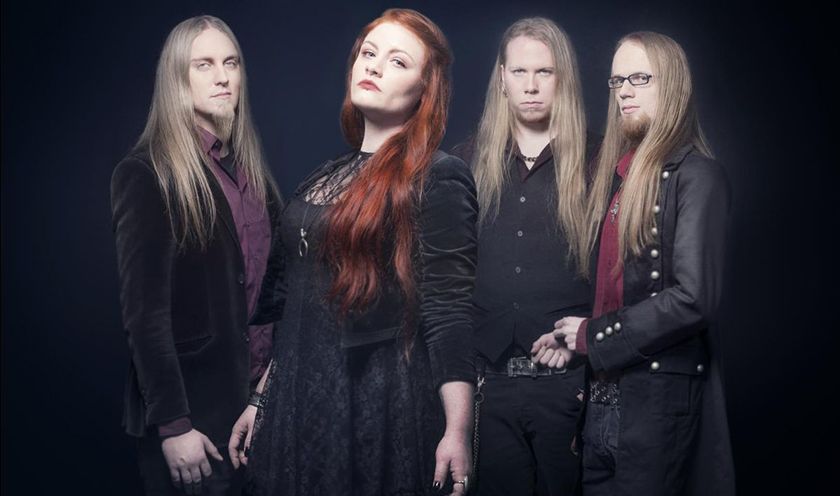 Napalm Records is delighted to welcome a promising and uprising symphonic metal star to its growing roster. Dive into impressive soundscapes and join the thrilling adventure: German firestarters ELVELLON have just inked a worldwide record deal with the premier rock and metal label.

Since ELVELLON came to life in 2010, the four-piece played its way straight into the heart of a steadily growing fan base with a captivating symbiosis of orchestral arrangements, heavy riffs and the striking voice of Nele Messerschmidt on vocal duties. After releasing their self-recorded 5-track EP, Spellbound (2015), and being dubbed as “heroes of tomorrow” by German Metal Hammer magazine, the band presented its critically acclaimed debut album, Until Dawn, three years later in 2018. Sharing the stage with scene leading VISIONS OF ATLANTIS and entering festival grounds like Rock Harz, Metal Hammer Paradise, M'era Luna, Rock Fest Barcelona, Metalfest Open Air and Rage Against Racism Festival, to name just a few, ELVELLON are now up to lift their inimitable output to the next level.

Enter a dreamlike world of cinematic magic, wandering between childish wonders and hard-hearted bitterness! More to be announced soon...

ELVELLON on the signing:
“Since we began our musical journey, it was our dream to sign with a legendary label such as Napalm Records. Now this dream became reality and we can barely put into words what we are feeling at this very moment. We feel honored to find ourselves among so many awesome bands. It's going to be a bright future."

For a vision of what lies ahead, check out the official music video for the bewitching track “Born From Hope”, which has already hit over 1.2 million views on YouTube, cut from the outstanding first full-length, Until Dawn.

Bombastic Symphonic Metal made in Germany: Elvellon are about to take the world by storm!

From its inception in 2010 on the quintet has stirred up the scene and has enthralled both its growing fan base as well as the music press with a captivating blend of catching guitars, thunderous drums and magnificent orchestration. As a result, renowned national magazines such as Orkus and Sonic Seducer took notice of the highly promising youngsters early on, while German Metal Hammer magazine even dubbed them “heroes of tomorrow”. Through their first online singles `Oraculum´ (2013) and `Born From Hope´ (2015) – which was accompanied by a masterfully crafted video clip by Mirko Witzki (Any Given Day, Caliban, Deadlock) that almost reached one million views on YouTube within the first year – the band proved that all premature praise had been well-deserved. The 2015 release of their self-produced 5-track EP “Spellbound” marked the first milestone of their career that sent critics from all over Europe into rapture.

Live on stage, the synergy of Elvellon's powerfully performed soundscapes and vocalist Nele's angelic voice always strikes home, too, with the result of a variety of celebrated festival gigs over the recent past, including shows at prestigious German M'era Luna Festival and Wacken Winter Nights.

After the first deal with the aspiring label Reaper Entertainment was inked, the course for Elvellon's conquest was set and things came thick and fast for them:Thanks to a hugely successful crowdfunding campaign, which reached almost double the funding goal, the band was able to finance their debut album ‘Until Dawn’.

Within weeks of its release, it was sold about 2000 times so that re-pressing of ‘Until Dawn’ hat to commence only three months later. Uplifted by both the fans’ and the journalists’ outstandingly positive feedback Elvellon will carry on their conquest at this year’s Metal Hammer Paradise festival in November as well as at Rock Fest Barcelona 2019, Metalfest Plzeň in Czech Republic and many other concert venues all over Europe. As far as milestones are concerned, there’s no end in sight!

COMMUNIC Hiding From The World