OLD CORPSE ROAD return with their new album to breathe new life into the dark and fecund myths and legends of England!

"On Ghastly Shores Lays the Wreckage of Our Lore", the band’s third full-length, will be released on May 15th 2020 via Trollzorn Records. The artwork was painted by local artist Kate Van Suddese.

OLD CORPSE ROAD have carved their name into the UK scene by producing classic, yet unique and original Black Metal based on the dark folklore of their home country. The Darlington based 5 piece formed in 2007 and take their name from a coffin road in the Lake District.

Watch out for a first official track premiere of the album later this month. 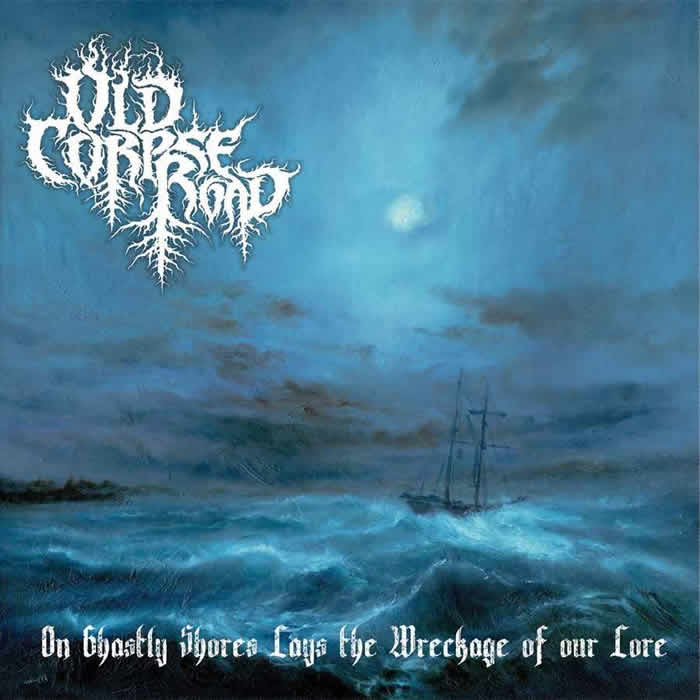 1. Ghastly Shores Lays the Wreckage of Our Lore

2. Harbingers of Death (Voices in the Tempest)

5. As Waves Devour Their Carcasses

6. Demons of the Farne

7. The Ghosts of the Ruinous Dunstanburgh Castle

The Old Corpse Road was conceived during the autumn season of 2007 during a brief excursion to the Lake District, more specifically Haweswater. This Autumnal break, in celebration of the wondrous and powerful music that we all know as Black Metal, awoke our desire to share our musical passions with other like minded people. The band name was taken from the road of the same name which rises out of the Haweswater valley and leads to Mardale.

The Journey So Far

2008 - Throughout the period of 2008 the band diligently worked on their first musical output focusing on creating classic British black metal fused with the passion and atmospheres created by British folk tales. Crafting each song carefully the band prepared several songs of which five were recorded. Of these three were put forward for the demo. During this year the band also launched a very successful MySpace website along with its own dedicated website.

2009 - On Friday 13th March 2009 Old Corpse Road unleashed their first demo "The Echoes of Tales Once Told" in a limited 1st Edition of 1000 hand numbered copies. Reviews of the demo were outstanding (click here to view them) and we gained much support including a slot on the Zero Tolerance covermount cd. On the strength of the demo the band were offered the chance to record a split EP with the Worms of Sabnock due to be relesed late 2009 on Godreah records.The Old Corpse once again entered the studio to record three more songs for the split EP, namely Hob Headless Rises, The Witch of Wookey Hole and The Devils Footprints.

The band hail from the North East of England, an area rich with ancient tales and rife with folklore. The line up consists of five members who have played together in various other projects over the last decade, most notably the dark metal band Nemain. We consider our individual identities to be unimportant, although those who ask shall be told. The members of the band are long time friends who form a part of the Nemain Collective. On a personal level the band follow the entire metal scene passionately and regularly attend gigs and rock nights whilst indulging in fine ales and beverages.

Old Corpse Road are not aiming to break any musical barriers, nor do we seek fame or infamy ; we only seek to give back to the scene that has given so much to us. Musically we are inspired by many diverse bands ; within black metal Bal-Sagoth, Primordial, Cradle of Filth, Burzum, Emperor, Abigor and Immortal. Old Corpse Road also enjoy classic early doom bands such as My Dying Bride, Celestial Season and Paradise Lost. The band find much pleasure in various other musical styles from Cold Meat Industries (Arcana, Raison D'etre) to traditional folk music, classical pieces and film scores.

As you will be aware the spectrum of Black Metal is as vast as the cosmos that inspires it; selecting the correct course for our creativity was a decision we did not take lightly. With the utmost contempt for religion, a total disregard for humanity, and pity for politicians and our ailing society we concluded that we would only become more bitter and spiteful following these paths. So after much discussion and introspective travel, we narrowed our focus to the single aim of playing Black Metal inspired by our true passions; Nature and British Folklore. Combining the dark beauty of British Folk Tales and the power and majesty of Nature, we hope to steal away your soul...

The Mythology Behind The Name

Corpse roads provided a practical means of allowing the transport of corpses to cemeteries that had burial rights. In Britain, such routes can also be known by a number of other names: bier road, burial road, coffin road, coffin line, lyke or lych way, funeral road, procession way, etc. Such "church-ways" have developed a great deal of associated folklore regarding wraiths, spirits, ghosts, and such-like. Many of the corpse roads have long disappeared, while the original purposes of those that still survive as footpaths have been largely forgotten, especially if features such as coffin stones or crosses no longer exist.